Brazil’s infrastructure minister has predicted a boom in development of the nation’s highways, railways and airports on the back of $50bn in investment in concession projects by the end of next year.

“With the planned concessions, by the end of 2022, $50bn will have been contracted in investments for the modernisation of airports, ports, highways and railways. In other words, the equivalent of more than 30 years of the public budget for infrastructure,” he said.

The investments will be a rare bright spot for the Brazilian economy, which even before the pandemic had for years been buffeted by anaemic growth, soaring debt levels and rising unemployment. Latin America’s largest nation is also plagued by weak infrastructure, notably poor-quality roads that increase transport costs as well as a lack of basic sanitation services for millions of poorer Brazilians.

The success of the concessions model — in which companies and investors bid to invest in and operate long-term projects — will also be a boost to the liberal economic agenda of the government and finance minister Paulo Guedes, who has sought to reduce the role of the hulking state.

In a marathon week of auctions last month, investors poured almost $10bn into an array of projects, including 22 airports, five ports, a rail line linking the country’s east coast with the western agricultural interior and multiple road works. French airport group Vinci won seven of the 22 airports, with Brazilian companies taking the rest of the concessions.

By the end of next year, the government plans to have auctioned concessions for 100 assets.

For de Freitas as well as independent analysts, much of the success of the auctions was down to improvements in Brazil’s regulatory environment and growing trust in legal frameworks.

“Brazil is well positioned to continue to attract international investors. The country is taking the right measures to attract them — structuring good projects, publishing the notices in advance in foreign languages, increasing the level of legal security for the projects and the arbitration clauses in contracts,” said Rafael Vanzella, an infrastructure lawyer with Machado Meyer Advogados.

“We have seen improvements, and each day an additional step is taken in this direction. Brazil is reaching an important level of maturity.”

De Freitas added that Brazil’s commitment to fiscal discipline — the clarion call of minister Guedes in recent years — had made investors more comfortable about considering the country.

A trained army engineer who moved into the public service more than a decade ago, de Freitas said Brazil was facing an “urgent task” to transform its transportation matrix and wean itself off heavily polluting trucking.

“The railway segment today accounts for only 15 per cent of the national logistics distribution, while road transport represents 65 per cent. The government’s goal is to increase the participation of rail to 35 per cent of the total cargo transported by 2035,” he said, pointing to the government’s flagship project to build a railway to connect the vast agricultural interior with Amazonian riverine arteries.

“The mere substitution of the road for the railway is estimated to reduce by up to 1m tonnes of Co2 from the skies of the Amazon per year.” 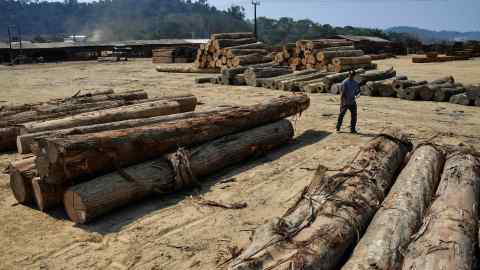 This focus on constructing railways has made de Freitas a popular figure in Brazil’s agricultural states and some have suggested he may have bigger political aspirations — a suggestion he denies.

He is, however, a target of ire among environmentalists, who say they have not been consulted on many of the infrastructure projects popping up around the country.

“The government talks directly with the business sector, but does not have a dialogue with civil society,” said Tatiana Oliveira from the Institute of Socioeconomic Studies.

“There is a pattern of treating the environment as an obstacle to the country’s progress and development. The environment and the communities have always been ignored.”

5 Will America’s housing boom lead to another financial...